June 19, 2006
Last week, I returned from a family wedding in State College, Penn. We decided to travel the way down after realizing that the time it would take to drive down would be about the same as it would be to fly after all the delays and waiting around airports (note: there are no real direct flights out of Ottawa except to "hub" cities). I had just received MapPoint 2006 and thought "now is the ideal time to try out the directions." I also retrieved directions from Google Maps just to be on the safe side. Since I wasn't bringing a laptop, I printed the directions and put some of the maps onto my Pocket PC just to be safe.

As it turned out, both of the maps were fairly identical but what I want to note here are very small and useful features that could be used to improve just about any mapping service, with a focus on Mappoint.

1. Export a Route to Pocket Streets.
Why this one hasn't been done is beyond me. You can choose to Export a map to Pocket Streets but if you choose too large an area, it tells you to select a smaller area. Well, when you're traveling for 9 hours, you KNOW you're going to be going to need a lot of maps. Why can't the software just export out maps that are all along the route (that it knows) and then move them over? I have a GPS unit on my iPaq and because I didn't print out all of the possible areas, I was frequently "Out of Map area".

That's right - 7 simple sentences. I think having a Direction Summary may prove extremely helpful since the names of the streets and routes often change and aren't always accurate. Yes, you need the details but - it's hard to read the details when...the DIRECTIONS are wrong. Note the picture below: 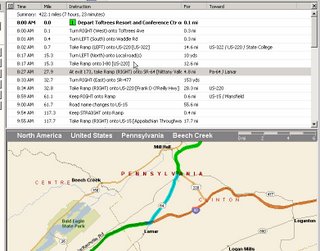 The directions state: Take ramp Right and then turn RIGHT towards pa-64 and Lamar. If you look at the map, Lamar is to the right but where is the highlighted route? It's going left. Because of this simple mistake, we lost about half an hour (took the right towards Lamar and then got back onto I-80 and then got off 20 minutes later). Summary directions would have resolved this problem completely and made MapPoint look like a hero.

3. Is Quickest really the quickest?
Sometimes, a faster route may not always be faster. But if you want to change the Preferred Route segments in MapPoint, you have to click 5 times to get there (Route->More Options->Segments-Preferred Road Types). The final destination would have been 20 minutes longer but all on highways. Hmm...what an opportunity - especially since the other way did note construction delays. In addition, if we had gone that way, the direction list would have been four lines instead of 6. It might be useful to immediately highlight two routes and allow the user to pick one to really determine which is faster.


Now, the GPS really helped us out big time- both in finding our way around Penn State but also ensuring we were going the right way but as I noted in #1, unless I had an easy way to print out EVERY possible map, it wouldn't have worked out.

This isn't a complete rant against MapPoint. I love it for a lot of reasons and MapPoint 2006 would have been great to have put along with a laptop with me on this trip (then I would have had all the maps - but then I would have to buy a GPS when my phone already has one) - hmm - maybe I need that new Avertech UMPC with GPS. MapPoint 2006 certainly has some great features like a Text to Speech feature for reading the directions but of course, those aren't on the Pocket Streets included with it. MapPoint 2006 boasts a few new features but all of these as far as I'm concerned really need you to have a GPS feature on your computer. Sure, it's cool to export out and look at stuff on Windows Live Local but otherwise, every other feature was really designed around making it better on GPS. Is that the target market here? If so, why include Pocket Streets?

As my wife noted, these are the reasons why people still don't rely on mapping web services. Small little changes would make all the difference in usability. Time to pull out the big map all over again.